R.O.S.H. Interview with rave duo RoughLinerz on the making of their track for ‘Club Prayala’ EP and a week-long sets

RoughLinerz - Pump by R.O.S.H.
Load audio
By clicking the Play button, you accept the use of social media cookies.
Or alternatively listen directly on SoundCloud

Long before I met the RoughLinerz, I heard them. By ‘Long’’ I mean, in the physical sense of the word, because it took me 20 minutes to get from the entrance of one of the ‘smaller’ clubs in the mega structure of Prayala, to the DJ booth at the back of the room. It was the longest 20 minutes of my life, where I passed identical sections of club floor space and lighting, galleried on either side by a bar that also appeared endless.

For a majority of the journey I thought I was being had in an elaborate game constructed by the bartending staff in their spare time. “Keep going mate.”, “You’re about 10 minutes away” and “Take a water on the house” as if I was participating in some form of marathon event.

Clearly, I was not the first to make this journey, nor the only one. A steady stream of people were making their way – at their own pace – to the front of the room, occasionally having to shimmy through denser sections of crowd, only to reveal clearings of empty space. When I finally got to the DJ booth – a disappointing barebones construct – I was greeted by the faces of two grinning geezers having the time of their life – and how could they not be? They were playing what sounded like happy hardcore in its final form. Ultra-glossy hook lines, crystal-clear pounding kick drums, anthemic chord progressions and impeccably delivered and catchy vocal lines – that I would later learn were entirely synthesised.

I spoke to RoughLinerz about how they got into hardcore, sound engineering in the 25th century and the length of modern DJ slots.

NB: At their request to remain anonymous and to preserve their artistic integrity I’ve listed them below only as RoughLinerz, with no identification as to which one of the duo is talking. I apologise if it makes the interview confusing to read, but it’s the only way they would agree to being interviewed in the first place.

R.O.S.H.: Thanks lads for joining me for this interview. I’m not sure this paper bag over my head is necessary, I have seen your faces multiple times and most recently when I opened the door to let you into my house 10 minutes ago.

RoughLinerz: It’s for our artistic integrity.

RoughLinerz: Are you gonna ask the questions?

RoughLinerz: We’ve got a 38 hour slot in the main room in 20 minutes!

R.O.S.H.: How do you guys even prepare for a set that long? Psychologically, are there drugs involved?

RoughLinerz: I put together a rough itinerary in our joint calendar about how we’re going to play it.

R.O.S.H.: With like different, genre’s and styles you’re going to go through at different times, or…?

RoughLinerz: What do you mean? We’re playing Hardcore non-stop, I’m using the calendar to organise sleeping patterns between us.

RoughLinerz: 38 hours is barely enough time to get through even a fraction of the greatest happy hardcore tracks out at the moment. I’m trying to think of the last time we were given long enough to do a mixed genre slot…

RoughLinerz: It was about 8 months ago remember? When they gave us the week long slot on the main floor.

RoughLinerz: Oh I remember now. That was a mental one. We really pushed the audience; going from happy hardcore all the way to hardstyle.

RoughLinerz: Yeah, that’s kind of the standard when they’re not programming a particular festival or something.

R.O.S.H.: I came up seeing FWD>>+Rinse nights load up every DJ on the station in one venue doing back to back 45 minute slots, so the idea of seeing a DJ play for a week is a struggle to comprehend. So let’s see if I can ground this interview with something that the 21st century audience can really understand – lets talk about mixdowns. Happy hardcore has always prided itself on sounding very clear, upfront and in your face – really pushing the limits of loudness in the digital realm. Could you explain a bit how the sound of hardcore has evolved over the years? I’ve played you some tracks from DJ Hixxy and Darren Styles to give you a sense where it was. How does that compare to today, in the 25th century?

RoughLinerz: This is something the both of us could talk about for days.

RoughLinerz: The stuff you showed us was so different to today!

RoughLinerz: It’s like covering my head in a pillow.

RoughLinerz: and someone punching that pillow repeatedly.

RoughLinerz: Yeah, the compression, it’s crazy. It’s like there’s not enough, but there’s also too much?

RoughLinerz: It sounds so thin.

RoughLinerz: Like someone’s flicking that paper bag that’s on your head near your eardrum.

RoughLinerz: It sounds exactly the same every time you play it.

RoughLinerz: Usually we have the synth or hi hats modulating a bit throughout.

RoughLinerz: Sometimes the last note changes every 64 bars of the hook.

R.O.S.H.: This is the first I’m hearing about this. I didn’t know you could do that. Any idea how that works? I had to ask you guys for a .WAV of your tracks for the “R.O.S.H. Presents” series and it took a while for you to get back to me.

RoughLinerz: Yeah, we had to look all that stuff up, I remember you kept saying the files we were sending were corrupted or something.

RoughLinerz: So it’s been .QAV files for as long as we’ve been making and listening to music.

RoughLinerz: We had to bounce out a static version. Think we rendered to .WAV about 20 times and picked the best version.

RoughLinerz: I tried looking it up, but it was just shit about quantum something. I didn’t get it.

R.O.S.H.: I mean, I’m just thinking out loud here – listen, let’s talk hardcore. There’s not a lot I expected to still be around over 4 centuries later and hardcore music was perhaps the biggest surprise. But on further reflection I think I was mistaken in my initial expectations. The sound of hardcore is emotive, it’s high energy. There’s something about it that appeals to our very base desires or expectations of “dance music”. A catchy hook. A strong beat. It is I guess, a timeless music, whose creation was inevitable as soon as the technology to bring it into fruition became available.

RoughLinerz: Is there a question in that….?

R.O.S.H.: I’m sorry, lost in my own thought there. I’ll be honest this paper bag really isn’t helping. It’s almost pitch black in here, sometimes I forget what I’m meant to be doing… or where I am.

RoughLinerz: That’ll be the chemicals we doused the bag in on your head, finally taking effect.

R.O.S.H.: Let’s go back to the set times and gigs at Club Prayala. You mentioned that a few months ago… they had you down for a week long set and now you’re “only” doing a 38 hour set. Why the reduction?

RoughLinerz: I know what their saying about hardcore.

RoughLinerz: That it’s not the thing anymore.

RoughLinerz: That nothing innovative is coming from it but –

RoughLinerz: I mean I guess it means all the hipsters and posers that follow trends have moved on though.

RoughLinerz: Not for the money but for the audience for sure.

RoughLinerz: They’re singing along to everything.

R.O.S.H.: Hmmm, mint. What ever happened to HTID (Hardcore Till I Die)?

RoughLinerz: That’s how we got into making this music in the first place.

RoughLinerz: Yeah, it was a mate of ours.

RoughLinerz: There are so many now.

RoughLinerz: But he was like, “Fucking hell guys, this things a trip.”

RoughLinerz: It’s nothing on the real thing.

RoughLinerz: But this was different.

RoughLinerz: All the VR people get to fly around the actual crowd as it’s happening live.

RoughLinerz: They’re really into it.

RoughLinerz: You can experience all the previous HTID events too.

RoughLinerz: Up to as far back as…

RoughLinerz: Although the experience isn’t as good on the old ones.

RoughLinerz: Subscription gets you actual entry into the events near you too.

RoughLinerz: So it wasn’t long before we went.

RoughLinerz: I was buzzing the entire time.

RoughLinerz: Everyone was tops off for the final 40.

RoughLinerz: It’s a 2 week event for the smaller ones in Luxembourg.

RoughLinerz: The real ones take place for a month on the island of Wales.

RoughLinerz: They turn the whole island into a HTID playground.

(R.O.S.H. slumps out of chair and on the floor face down unconscious)

RoughLinerz: I can’t believe it took so long.

RoughLinerz: Most people are out in a couple of seconds.

RoughLinerz: We’re gonna be so late for the gig.

RoughLinerz: We have to take him to the immortals.

RoughLinerz: He’ll still be here, slumped on the floor by the time we’ve finished our set. 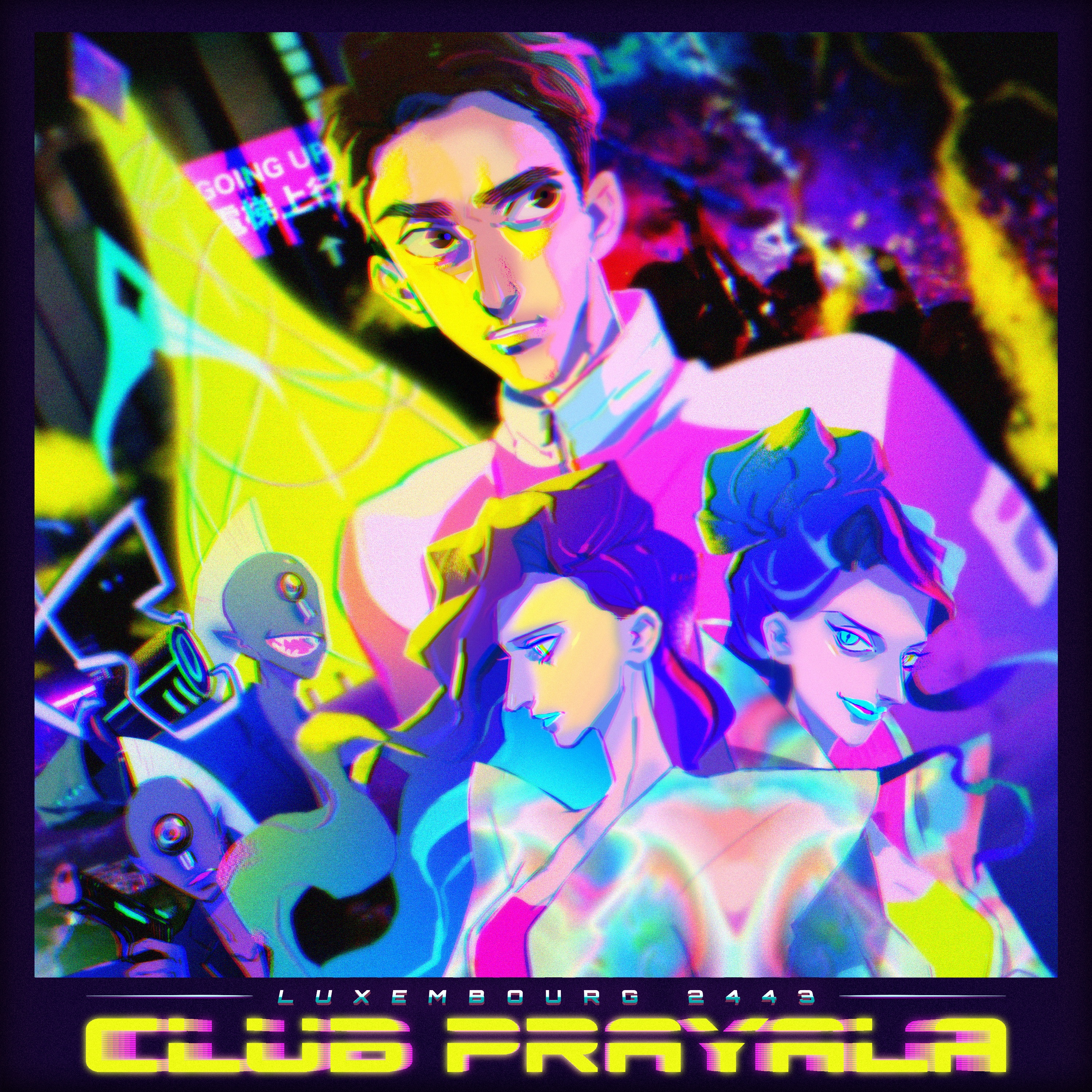 Earlier this year R.O.S.H. was jettisoned into the absurdist future of the previously land locked state of Luxembourg to the year 2443. Now he returns to the 21st century to reveal his experiences traversing the halls of two competing super clubs, fighting for entertainment dominance of the worlds party-going elite.

In this first installment of R.O.S.H. Presents: Luxembourg 2443 we take a glimpse of the inner workings of Club Prayala – a devastatingly tall spire that dwarfs all known feats of 21st century architecture.

R.O.S.H.’s journey up the diamond-tipped golden tower is a story of love, debt enforcement and financial super computing AI. It’s after surviving these trials of credit worthiness that R.O.S.H. emerged with a collection of 4 choice tracks that best represent the future sound of Club Prayala.

The artists encountered on this adventure include RoughLinerz, the energetic rave duo trying to keep happy hardcore relevant after it fell out of favor for the 4th time in as many centuries.